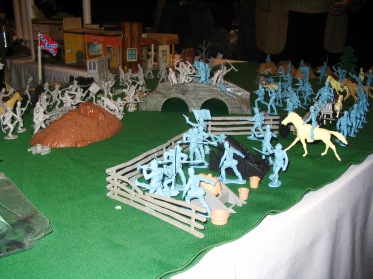 While on the one hand the suggestion America is in the midst of civil war has the conspicuous taint of shall we say overreach, or perhaps screeching hysteria, on the other hand most of our democratic business as usual increasingly has the feel of make-believe as well, our politics and the media coverage of it retaining a comfortable, familiar form that belies a brutal melee for large stakes.

It’s true that analysts, pundits, consultants and occasionally members of the government can chat amiably across partisan lines on the sets of television shows. I hope it wouldn’t be too much overreach to suggest this is not real. The camaraderie of those anointed as Important Enough to Talk on Television is surely uplifting.  Break a leg and all. But the real state of affairs is more accurately reflected where the grunts are fighting the battles on blogs and message boards, in political organizing and issue advocacy, where the fierceness more closely hews to the battles being waged by politicians in their war rooms, in law firms, lobbying boutiques, corporate offices, and the finance committees of pacs.

I suppose we won’t get a cohesive view of it until Ken Burns has made his documentary. But at this point it can’t be too much of a reach to declare that a century’s worth of American progress seems to be on the line, and that it is no ordinary political battle, that those seeking to repeal this century of progress are no ordinary partisan warriors. Though I delved into the idea of de facto civil war in last year’s American Civil War 2011, I am beginning to sense that it did not produce a diminishment in our discord, nor did anything else; leaving no other choice it would appear but to revisit the subject on an annual basis.

In fact, I was prompted by the reporting on a book by Robert Draper containing the revelation that at the moment when newly inaugurated President Obama was attending the inaugural balls a collection of Republicans gathered to plot the obstruction, and total undermining of his presidency, an effort that has visibly come to pass. That such an organized cabal set forth to destroy a presidency literally at its start is not what at this point in our history is revelatory, but merely the attachment of a specific time and place to one such council. While I admit I have no idea how treacherously the opposition went for the jugular of Rutherford B. Hayes such an effort as this amounts to the total undermining of the country in the name of undermining its elected leader; at the least, it is impossible not to undermine the country in the course of undermining its leader to this extent.

Had this not started more than a decade ago directed at a previous president it might be regarded as a temporary dust-up rather than what it is: a tipping point in American history when one political party and the movement behind it no longer accepts the opposition as a legitimate participant in the democratic project. Once one part of the polity has advanced to such a level of extremity as one of ours currently has, neither the disposition of the other part toward it nor actual efforts to sustain a bridge makes a difference.

In fact, anyone fully familiar with the previous organized effort against President Clinton, generically known as the Arkansas Project, fully and brilliantly recounted in the book by Joe Conason and Gene Lyons, The Hunting of the President: The Ten Year Campaign to Destroy Bill and Hillary Clinton understands that this is not a sudden gathering of animus but instead an ongoing program of internal warfare, sans guns, but with little else off the table. Of course, once you have challenged not only a president’s legitimacy but his very citizenship (an initiative remarkably mainstream on the Republican side of the spectrum) increasing violence and potential for violence in one form or another no longer is especially remote.

But whatever one makes of the level of hyperbole, hysteria, excess, or putative hyper-partisanship in this exercise of mine, at the very least sentient persons ought to acknowledge that mainstream media’s pantomiming the appearance of balance with its attendant drone of political clichés and hackneyed observations on television is the cause of much gastrointestinal challenge to the extent it conceals the tumultuous and frankly brutish reality. It’s understood that for the more or less permanent inhabitants of Washington, the cocktail party circuit as it were, the world weary, seen all the machinations of power and gamesmanship jadedness is going to be de rigueur. Even perhaps is the careerism that renders on-air personalities as glamorized, intellectually lethargic work horses plodding along  absent inclination much less zeal for anything other than dancing in the well-trod choreographed  steps (I’m looking at you Meet the Press). It should be noted however that what that traditional insularity is detached from are increasingly portentous circumstances for many American citizens whose health, homes and security may seem to them to be teetering on a political cliff, with the plunge much too close for comfort.

I’ve read the Ryan plan, endorsed by Mr. Romney. I’ve witnessed the passage of assorted legislation (including the Ryan Plan) in the House of Representatives which if fully enacted would desperately rearrange the lives of many Americans and profoundly rearrange the American landscape as we have known it since the Progressive Era at least. And having witnessed a significant number of American legislators take America to the brink of financial default, while many championed doing so no matter what, I believe it is perfectly reasonable to infer a real possibility of the American safety net largely disappearing, and a deep disparity in wealth and income and opportunity legislatively and institutionally set in stone. Against this, the banality of the habitual, methodical, mythical and make-believe is increasingly insulting to the American intelligence and a harmful disservice.

Perhaps it isn’t so much that Americans are more and more disgusted with the political or with partisanship or with government dysfunction; but that institutional and media rituals have increasingly little relevance to what they know from their actual experience: all hell has broken loose. Perhaps the honest acknowledgment of that in our more prominent public forums would be salutary.

While this war will take the course it will, I feel the least I can do is to call for a moratorium on use of the word bipartisanship, and to enlist the group People for a Less Nauseating America to pressure everyone they can track down to call for the criminalizing of all attempts to talk across the political divide, rendering such attempts punishable by hanging or lethal injection of ostracism. I also hereby authorize Mr. Burns to include this post in his defining work on this war, as an early letter home, preferably read by James Earl Jones or perhaps Sir Ian McKellen since the British sound smarter.