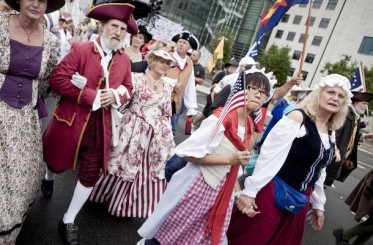 Keep your Halloween. I’ll pass on the chance to be gratuitously frightened. I have the American political process to guarantee I’m myocardial infarction bait, and if that doesn’t suffice, unlimited American gunplay and the human condition. But thanks.

Many would agree that the most desirable thing about a strong, abiding romantic relationship is that it significantly reduces the likelihood you’ll find yourself in a one on one situation with an insane person, which essentially describes dating. Thrown into an encounter with state, local and federal authority determined by my fellow citizens is the scariest date of all.

For instance, here’s a very limited sample of statements made by government officials who have been elevated to public office by America’s voters.

“Just because the Supreme Court rules on something doesn’t necessarily mean that that’s constitutional,” said Oklahoma Republican Jim Bridenstine after the Obamacare decision, speaking of the branch of government whose principal duty is ruling on the constitutionality of laws.

“We know Al Qaeda has camps on the Mexican border. We have people that are trained to act Hispanic when they are radical Islamists,” said Texas member of the House of Representatives, Republican Louie Gohmert, this being among his more enlightened observations.

“I think, personally, it would bring stability to the world markets.” Ted Yoho, Republican Rep. of Florida astutely opined on the prospect of the United States defaulting on its debts during the Republican instigated government shutdown.

“Yeah, I would.” This is what Republican Nevada Assemblyman Jim Wheeler answered when asked whether he would vote to reinstate slavery if that’s what his constituents wanted.

Yes, in each of these cases, the person making the statement is a board certified idiot. And these statements represent the cream of the crop from America’s Olympian inane statement producing team.

Yet, how do we classify our fellow citizens who voted to put them in office? Are we to infer these citizens know even less than the person they’ve elected to govern them? How dumb exactly would that be?

If the elected official is, in mental health terms, three legs short of a four-legged table, what does that say about the mental capacity of those who have voted for him?

These officials didn’t, to the dismay of their constituents, turn out to be, after several months in Washington, completely full of shit. Voters sent them there that way.

Halloween? Are you kidding me?

And then there’s Fox News. It’s the primary, if not the only source of information for millions of potentially voting Americans. Fox News recently reported on a poll that showed 120% of Americans held an opinion on climate change. If your principal source of information reports on the opinion of 120% of Americans, I don’t mind admitting, your choices in the voting booth are making me nervous. Xanax quality nervous. Multiple milligrams quality nervous.

And then, there are the evangelists. And Rush Limbaugh. And the NRA. Pick your poisoned Vesuvius spewing misinformation, bigotry mythology, and counterfeit intellectual currency into the air. It’s not that each of these is a disgrace to baboonery that worries me. It’s that they are filling millions of Americans ears with fecal matter that will largely determine their actions as American citizens. That these with a moral compass lacking only an arrow pointing in the direction of morality provide the moral guidance for millions, is a laxative for the bejesus in you to put it mildly.

Also remember the disproportionate representation small or rural states, where so many of such citizens reside, have in the U. S. Senate. This is what some might describe as  a dangerous structural defect. 38 million people living in 22 of the smallest states have 44 senators representing them. The 38 million residents of California: 2. Alaska enjoys 30 times the voting power New York does. Skeleton suits and goblin masks? Wear those statistics on your face Hallows Eve.

Republicans have gerrymandered congressional districts so imperviously that Republicans now can nominate any telephone pole or distributor cap or fossilized remnant of Early Man, and he or she is guaranteed election to the U. S. House of Representatives. There’s your Halloween.

It’s important to keep in mind as well that Republicans are doing everything humanly possible to suppress the votes of those who do not fall into the above categories of the fragile minded, misinformed, or intellectually bovine. I guess that’s the trick part of trick or treat.

The treat will come  when I, and no small number of like-minded fellow citizens no longer are required to sum up the condition of our representative democracy with the sentence: God, I sure get tired of reading and hearing the stupid shit stupid fucks are saying.