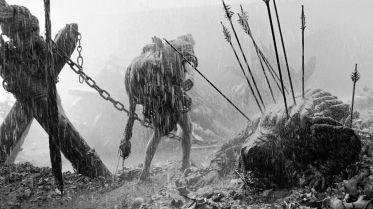 Europe coalesced into a unified entity only after centuries of nationalistic, sectarian and religious conflict culminating in the massive bloodletting of the two world wars. Myths, primal instincts and tribalistic impetuosity are overcome only with the wisdom that comes after great suffering. But they never really die.

It’s not going to end well here or abroad.

Analysis of the voting in Britain tells us that much the same demographic so enamored of Trump’s febrile nativism, nationalism and strong man mythology voted to regress in Britain: older, whiter, less educated.

A lot of bad ideas feel good. Anger and agitation build, and after a brief, cathartic moment of bliss, the realization sets in that things have only gotten worse.

This almost certainly will be the scenario for England: it will be poorer, more expensive, and less important politically after it has left the Union.

If isolation, bluster and homogeneity made nations stronger, North Korea would be a colossus astride the globe at the moment, rather than the hermetic, saliva-dribbling pygmy it is.

Tell it to fans of the presumptive Dear Leader, The Donald.

The noxious marriage of feudalism and racialism that has sustained the Republican Party for decades, electorally as well as ideologically, still does. Trump simply sells the grog produced from this funky marriage with the ingredients more clearly labeled, vowing to more dictatorially shove it down the deserving throats.

The right labels it variously as smaller government, state’s rights, decentralization, Austrian economics or supply-side, yet it’s all the same arsenic-laced magic potion, a toddy at night for the comfort of the white, the rich, the ever resentful.

The Trumps of the world contrive to convince the forlorn souls who would take them seriously, that conflict and aggression, separation and purification make a country stronger. Simplicity, boldness and hardness often are linked, consciously or not, in the minds of those receptive to an authoritarian lure.

In these minds, fortified by the words of demagogues, cooperation is softness, compromise weakness, intelligence suspect, what with its tendency toward restraint.

Unfortunately, stupid people, if there are enough of them, and their acts are stupid enough, cause harm not only to the stupid themselves, but the rest dragged into the muck behind them.

Inevitably, invariably in the course of human history, purification, the drawing of tribal lines in the sand, the assertion of national dominance, ends in enormous suffering.

All of this brings to mind relevant words of wisdom from the forever wise, and morally astute French novelist and essayist George Bernanos.

Civilization exists precisely so that there may be no masses but rather men alert enough never to constitute masses.

Pride has no intrinsic substance, being no more than the name given to the soul devouring itself. When that loathsome perversion of love has borne its fruit, it has another, more meaningful and weightier name. We call it hatred.