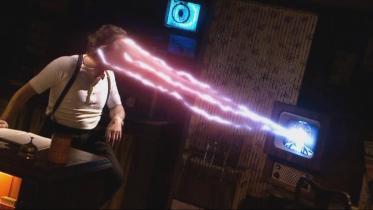 Sundays, always a rich day for those seeking imbecilic televised commentary on the political zeitgeist may best be construed as a television news perp walk of the dumbest ideas and worst lies of the week represented in human form by a parade of dunderheads and dissimulating creeps, elected officials, media stalwarts and everything in-between doing the walking. Meet the Press, This Week and Fox News Sunday are the reliable treasure trove.

Fox News Sunday is to an aficionado of stupid people on television what a vat of pure melted chocolate is to chocolate lovers. Mitch McConnell was government’s highest ranking stupid person performing up to expectations yesterday, cramming more inanity and falsehood into a couple of sound bites than scientists previously believed possible.  When asked how Republicans would provide health care coverage to 30 million uninsured he answered, “That is not the issue,” adroitly giving the opposite of the correct answer with admirable succinctness. When he was then asked, “You don’t think 30 million uninsured is an issue?” he said, “We’re not going to turn the American health care system into a western European system. That’s exactly what is at the heart of Obamacare. They want to … have the federal government take over all American health care. The federal government can’t handle Medicare or Medicaid.”

There simply aren’t a sufficient number of accolades for stupidity available to properly celebrate a comment asserting that a plan that funnels 30 million more Americans into the private health insurance system (and their premium payments into insurers’ coffers) is a, “federal government take over all American health care.”  Ambitiously stupid if nothing else, McConnell couldn’t be more wrong in his assessment of Medicare which is the most effective and efficient program in history, supported by eighty or ninety percent of Americans judging conservatively, and with administrative overhead costs a fifth of that for private insurers. To his credit too, when he claimed, “It is already the finest health care system in the world,” about America’s health care system he managed to miss the mark by a full 36 nations, America’s health care system rankIng 37th. All in all, a bravura performance by the Mitchster.

Marsha Blackburn, Republican congresswoman from Tennessee and no piker in stupidity herself, uttered this bon dud on CNN: “You know, back in August ’09, we were all saying that this seemed to be a tax, and if it was a tax, then this was going to be the largest tax increase in history. Indeed it was, and is.” Somewhere between this nugget falling out of her mouth and hitting the floor the factually inclined already were hitting the internets posting the facts demonstrating this was nowhere near the largest tax in history and indeed somewhat far down the list.

Fareed Zakaria’s GPS usually provides a more enlightened conversation (though still not up to the level of Up with Chris Hayes or Melissa Harris Perry). Yesterday though it gave fans of Sunday news show dunderheadance perhaps the most obtuse man ever to appear on one of such programs and a real treat. His name is Peter Schiff, an investment broker, radio spit baller and Republican primary candidate for the Senate in Connecticut (he lost). In a comment entirely worthy of the man’s sublime dimness, he said, “You have to understand why the health care is so expensive right now. It’s because of government.’”  This may either be the lie one would expect from a Republican from the state where the headquarters of many of the nation’s largest insurers happen to be, or just a juicily ironic instance of mega stupidity. In any case, the trillions upon trillions of dollars paid to health insurance companies each year which provide zero, I repeat nada health care to anybody, but simply take our premium money, pay out as  little as possible to health providers and then pocket the rest may, Mr. Schiff, have something to do with why health care is so expensive. Let me explain it this way Einstein: Take private health insurance out of the equation and medical care would be a lot cheaper.

Magnificent jughead Schiff also coughed this one up: “We had a much better health care system…before we had Medicare and Medicaid.”  The beauty of this one in terms of pure idiocy comes from the knowledge that before Medicare’s creation only half of older adults had health insurance, insurance widely unaffordable if available at all to seniors, a time when older adults had only half as much income as younger people and paid three times as much for health insurance. Indeed, this is a stupid person’s version of the good old days. Referring to America under health reform, Mr. Gump said, “But, you know, this is not the kind of America I want to live in.”

I’m sure I speak for many Americans when I say we prefer you not be living in it either.