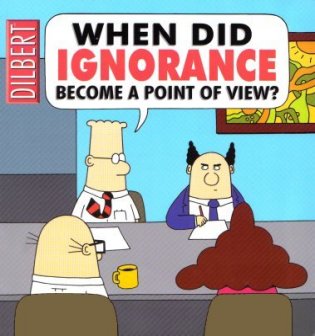 Watching news clips of a series of prominent Republican members of Congress along with the omnipresent Sarah Palin declare their steadfast opposition to raising the debt ceiling, under any circumstances seemed to put the current siege of the nation by ignorance and irrationality into true perspective. It wasn’t simply what they said but how they said it, speaking with a proud, righteous, defiance, as if declaring opposition to a vote to posthumously impeach George Washington. Certainly no one with even the most rudimentary understanding of what the function of the debt ceiling is would speak so blithely about the subject, and with such apparent ignorance.

Ignorance of itself is not necessarily frightening, often just sad, though it can endanger others in certain situations. However, when it is persons holding high public office, offices on which the welfare of millions of citizens depend, then pervasive lack of knowledge in general, and more pertinently, about matters relevant to the positions they hold and the decisions they make,  it’s a concern. It is especially a concern when the vacuum where actual basic knowledge should be, is filled instead with ideological cant and unexamined ideological assumptions and convictions.

If this display of obvious ignorance occurred only in regards to the debt ceiling it would be disturbing enough. But the new breed of Republican ideologues, no doubt assimilating from the panoply of rightists propaganda outlets, all sorts of convictions that leave them certain basic, genuine inquiry into the subjects with which they deal is unnecessary and a waste of time, seem breathtakingly ignorant about all manner of subjects it would be useful in their jobs to know a little about: history, law, science, economics, to name a few.

Worse, many right-wing office holders appear to operate with some perverse self-satisfaction, or tragically oblivious populist identification that leads them to believe that not knowing much is really preferable to the burden of knowledge, which would only interfere with their presumed basic common sense (also questionable for most of them). They market their obstinate refusal to acknowledge basic scientific or economic conclusions or the validity of accumulated bodies of knowledge as a selling point, evincing an adolescent scorn for all of that, as if they didn’t need to know all that stuff the grown-ups know.

This isn’t some elitist call on my part for only pointy-headed academics or Ivy League educated graduates to run the country. It’s simply wanting those who hold this power to retain enough intellectual curiosity to study up on subjects important to their jobs, or display basic common sense, or perhaps the basic character not to allow ideological assumptions and ideological conventional wisdom passed around by political entertainment outlets to substitute for genuine knowledge.

If we employ a police officer and authorize him or her to use deadly force, the recruit is subjected to a course of training in the fundamentals of the job they’ll do: the use of firearms ,or tactical maneuvers, or other useful training one would expect for people to whom we hand authorization to exercise power over fellow citizens. CPA’s, lawyers and many others are required to pass professional examinations in order to work in their chosen professions. The hiring process for almost all jobs requires presenting a resume, or demonstration of experience and understanding germane to the job for which the person is applying or being hired.

Listening to this new breed of Republican, and I use new to mean the last ten or fifteen years, though the current crop of rightists is a sight to behold, as they talk with all sorts of braggadocio and surety and certainty about subjects they obviously know nothing whatsoever about, one senses they tell themselves that a bunch of people have voted to put them in office, so hey, they must be pretty sharp, right?

Observing the behavior of the more recently elected ultra-right extremists rebranded as the “Tea Party,” one detects a growing pervasiveness of outright eccentrics, not amiable or creative types, but small-minded cranks convinced they are never wrong in political life or out. It may appear refreshingly democratic that almost anyone can parachute into elected office, but in a world as complex as ours, people in power who command very little expertise or broad knowledge but only unswerving convictions put a lot of American citizens in peril.

And what do they know? It’s almost a rite of passage now for Republican politicians to dismiss the science of evolution, proudly discounting it with the same blithe superstitious rectitude with which they dismiss national default. It does approach frightening when so many people in one of our two major political parties do not understand evolution, and seem to rely entirely on political guidance and assurance rather than any immediate or direct contact with the actual science. There is nothing remotely exotic or speculative about the science of evolution. It is well understood at the most fundamental level of biology and biochemistry. The accumulated body of data about evolution is simply profound, as sound as our understanding of physics or chemistry or geology.

What does this breed of zealous ideological converts know about the actual science of climate change, as opposed to the political boilerplate in which they have been immersed? Considering how much is riding on their genuine understanding of the actual science, what does it mean that so many of them actually doubt the motivation and expertise of scientists who have spent their lives devoted to the very field? Can wishing it all away with ideological conviction wish away the eventual consequences? When it doesn’t, what do they do then? Whom do they blame? Themselves? As Jerry Seinfeld would say, “Not bloody likely.”

Behind all their anti-tax absolutism and pro-corporatist and pro-wealth advocacy are they in any way acquainted with the economic data and economic record illuminating where GDP has been going over the last two decades? Do they know anything about the histories of societies with exaggerated wealth disparity, and would they ever even bother to inquire?

Do they understand what a regressive tax is, how most of the taxes Americans pay, payroll taxes and sales and excise taxes hit harder the lower one is on the income scale, and that it is the largest source of taxes paid by eighty percent of Americans? Do they really understand that the wealthiest Americans derive the bulk of their income from their investments, and pay taxes at a 15% capital gains rate, while ordinary American pay more than twice that rate on the paychecks they earn? Do they know, while they are arguing for even lower rates on capital and for corporations that Ronald Reagan raised the capital gains rate to 28%? Do they know that tax revenue collected from corporations is at its lowest levels in American history?

Do they know that prior to the Social Security about which they speak so venomously, and so reckless seek to diminish, that triple or quadruple the number of elderly Americans living in poverty now lived in poverty then? Do they know that prior to the Medicare they seek to strip to the bone sizable numbers of seniors simply could not afford the needed medical care, and that one reason life expectancy has significantly risen, is because the elderly can afford to see their doctors now?

Do they know anything about historical tax rates, the history of labor, deficits, national debt, the role of government in the American economy over more than two centuries?  Do they know that even if the nation does not technically default on its debt immediately, in other words is able to pay off it creditors but unable to pay out the rest of government expenditures, that 134 billion dollars will be tossed out of the American economy instantly, throwing  it into immediate recession?

I can’t say listening to them that there is any discernable indication whatsoever they understand the slightest bit of any of this. Perhaps many of these loud talking, absolutely convinced true believers on the right really are such lost souls, so ideologically indoctrinated beyond the reach of reason and empiricism and rationality, that they just don’t care at all; or they hold the view that even if all material evidence does disprove most of what they’ve placed their faith in, it doesn’t matter: they still like those ideas better; those abstractions sit more comfortably with the way they see the world.  And most of all, they just despise those liberals and Democrats and progressives they’ve heard so much about. And that’s all they really need to know.

They’re at least partially in charge of us all now, and at the very least, driving the entire national discussion, having dragged the rest of us into their land of superstition, righteous certitude and undeniable ignorance. They may be winning, so there may be more of them to come, and more of them with power over our lives.