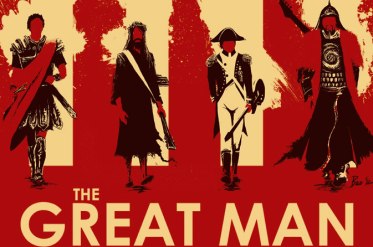 No one, it appears, can make it stop: the country is turning browner, and worse, progressive, or what in the rest of the world they would call: rational.

But there on the horizon, rising like the horseman who would reverse the apocalypse, a Great Man, one who will put all of it right again (and them back into their places). This time the Great Man has the shape of a Puffer Fish, and a strange, tangerine helmet upon his head.

The yearning for the Great Man often is attributed to Russians, and other peoples with a history of kings, czars, and cravings for order.

But if there is one thing America’s nationalists, nativists, and conservatives love: it’s order. Preferably, the kind that keeps the wealth of the nation floating at the very top, and the peons humble in their place.

Who can end this madness? Gay people treated like other people, and admitted into the sanctity (I have faith that your punch line here will be as good as mine) of marriage? Brown and black people having a say in who will lead their country?

Only a Great Man can stop the ground from shaking.  And the only one available at the moment is…that’s right: The man who inherited a fortune in real estate, and kept, well, most of it (give or take a bankruptcy here or there).

Indeed, the threat not only is within, but without. The rest of the modern world has embraced the welfare state, a blending of markets and intervention that produces the maximal quality of life for the most citizens. In the United States, the ownership class and the wealthiest reactionaries have managed to hinder it in some part for a remarkable length of time.

Yes, the New Deal got by them, Medicare, a safety net, and a form of national health insurance (oh my!). But the future still seems to hang in the balance. There’s still hope America can remain a permanent backwater.

Republicans always have been, and always will be control freaks. Dick Cheney and his unitary executive theory, Nixon’s imperial presidency, the hegemony of corporations and business owners, the hierarchies of multinationals, military organizations and class structures.

The American right didn’t support Somoza in Nicaragua, Pinochet in Chile, Marcos in the Philippines, Rios Mott in Guatemala, D’ Aubuisson and the death squads of El Salvador, Papa Doc in Haiti, Seko in Zaire, and apartheid in South Africa because of a soft spot for warm weather.

A significant contingent of American reactionaries thought Hitler was their cup of tea initially.

While disliking their talking points and their nuclear weapons, conservatives deeply envied the degree of control Soviet government enjoyed over its helpless citizens.

The typical conservative response to anti-war protests and other expressions of dissent in the United States during the cold war, was to say, “They wouldn’t get away with that in Russia, no sir,” the thinnest of veiled endorsements. This was pervasive, from Jesse Helms to Great Man himself Ronald Reagan.

So, where the hero, who can set things right in an America dangerously on the cusp of the future? There must be at least one huge last hurrah for white hegemony and privilege somewhere.

Where the new czar, the new non-shrugging Atlas, the Galt for the utopian ideologies of non-existent halcyon days of a distant past?  For the green pastures of a newly branded (think Austrian School Economics, Supply Side) yet familiar feudalism?

That bulbous creature with the ass-backward orangutan on his scalp, that sleazy carny barker of reality television, that Il Duce of smelly New Yawk real estate may just have to do.

Whether he ultimately wins or not, Trump is the soul and heartbeat of the Republican base.