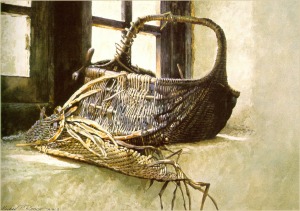 One can only wonder if we look as bad from afar as we look up close. We’re desperately near the point of becoming the Gloria Swanson of nations, a washed-up old star still declaring our readiness for our close-ups. Norma Desmond at least had the acceptable excuse of the ravages of Mother Nature. We, on the other hand, have through neglect, bad ideology and a comatose electorate allowed ourselves to go to seed.

There’s a reason America doesn’t invest in itself any longer, and correspondingly, fails to invest in its future, and it has a great deal to do with the dominance of far right ideology in our politics and in our governance over thirty years. But powerful as the political winds, and the propaganda occasionally have been, the electorate cannot escape its share of culpability.

But the fact is, our extended failure to invest in ourselves has taken its toll. Our politics can decouple from the larger reality, our conservatism can seek a created, ideological reality that transcends and replaces the other. We can, out of the obstructionism and backward trajectory of our conservative political class shun the progress of other modern states, eschew science and enlightenment and material fact, but concrete reality proceeds apace, with or without us.

In that regard, our failure is apparent in the slipping quality and rising expense of American healthcare, the subpar educational achievement of our students, the frailty and deterioration of our infrastructure, the struggles of our industrial base and the diminished expectations of our middle-class. It isn’t a mystery and it isn’t an accident, any more than the comparative rise elsewhere is. While on the basis of sheer size, our economy is still a giant, it increasingly produces an unsustainable disparity of results. Likewise, it is a country bloated at the top, a country with a gleaming outer shell that covers a core shabbier by the day.

The conservative modus operandi for three decades now has been to starve the beast, in other words, when in power, Republicans will spend on Republican priorities and break the bank, leaving Democrats to do the repair work at the expense of investment in our people and their prosperity and their security. Somehow the conservative belief is that the resultant wealth disparity will leave the beneficiaries at the top untouched, a suspect conviction that a return to a top heavy class system, or a kind of neo-Feudalism is more desirable than previous versions, the ones our ancestors sought to avoid at all costs in our new nation.

Looking into America’s future, pessimism is realism. One can drive the challenges of adapting to a warming climate out of the political and governing process, but one can’t avoid the eventual consequences. When a sizable segment of one of our two principal political parties rejects the Theory of Evolution it may be a national embarrassment, and it may impinge on the quality of the education students receive when science is censored from school curriculums or equated with religious doctrine, but the direct impact on the nation does not have the same dire potential as what amounts to a willful national obliviousness to an imminent threat. It’s not merely 99% or so of our climate experts who warn of perilous consequences, but the American defense establishment, Pentagon analysis predicting a growing threat to American security by the impending transformations that will occur around the world as the result of climate change.

Bold government initiatives are nearly impossible now, the nation so politically bifurcated, any sort of practical cooperation or major, national problem-solving endeavors now all but out of the question. We almost literally sit and stew in the minutiae and irrelevance of our political tempests and the corresponding and inevitable practical quagmire.

Our political dialogue has been pushed so far to the outer edge it no longer connects in any meaningful or useful way to the actual world in which we live, detached from contemporary reality as experienced elsewhere in the modern, industrial world, much of our population captives of manifestly insensible indoctrination, myth and fanciful expectations and beliefs, willfully and defiantly at odds with, and sheltered from the dictates and dynamics of an engaged world beyond our shores.

Our conservatism offers nostrums such as a mythical 18th century government for the 21st century world, exotic economic theories, wishful assumptions and implacable doctrine that in the end are an attempt to meet the social and economic challenges of a contemporarystate with prescriptions which would be the equivalent of attempting to cure cancer with herbs and vitamin supplements.

Other nations are adapting to the modern world, adequately educating their kids, building modern forms of transportation and internet infrastructure, and making it a national priority to have as many healthy citizens as possible. The goal is not some abstraction of equality or fairness, but the recognition that in a modern, interconnected world, no one is safe, secure and prosperous unless the society is vibrant from top to bottom, and the distance between economic classes is not so vast as to make their coexistence uncomfortable and problematical, or potentially volatile and catastrophic. Unless there is a commitment to lifting everyone, the nation as a whole is dragged down.

And there’s a lot to fix. While the recent health reform law improves our health care challenges at the margins, the national fai1ure to implement a cost-effective system that is fully accessible leaves us stuck in a still inferior, still expensive and inefficient system, where health costs can only rise. America spends more than twice the percentage of GDP on healthcare as nations with universal coverage, getting health care outcomes that continue to be inferior by every sort of metric, and continue to decline, our citizens becoming comparatively less healthy every passing year. Perhaps more sobering than the comparative figures for say life expectancy or infant mortality or doctors per 1000 in the population, and they are very disturbing, is that among the top 19 industrialized nations America is first in preventable deaths. That is indisputably a failure of preventive care, and directly traceable to limited access in the United States.

The American middle class no longer enjoys superior wages. According to measurements by four organizations (IMF, World Bank, CIA Factbook and OECD) using the PPP (Purchasing Power Index) America is now eighth in wages. The average earner in Qatar or Luxembourg has twice the purchasing power of the average American.

When it comes to infrastructure, the analysis confirms what travelers to Europe or Scandinavia or Japan have seen for themselves, which is that the infrastructure of cities elsewhere is conspicuously newer and visibly sturdier, the transportation systems faster, more available and more comprehensive. Our highways are comparatively, both unsafe and slow. America has 15 deaths per year for every 100,000 people, 60% above that of OECD countries. In a comparison of the overall quality of infrastructure, America now ranks 23rd.  American investment peaked around 1960 and has declined since. Total public spending on transportation and water infrastructure is currently 2.4% of GDP, whereas Europe as a whole invests 5% of GDP in infrastructure. China invests a whopping 9 %. The Census Bureau projects the population here to increase by 40% over the next four decades. Unless significant public spending is diverted to infrastructure it is difficult to see how America avoids a literally crumbling and collapsing infrastructure.

Another area of perhaps surprising American inferiority, and another case where visitors to foreign countries have first-hand comparative evidence, is the speed and reach of internet service. America ranks 28th in the average internet connection speed, and only 17th in broadband penetration: in other words access to internet service.

However, if it’s triumph you are looking for we do finish first in carbon dioxide emissions, gun ownership, prison population and incarceration rates for those eager for national pride in high finishes. And if it’s any comfort, we currently operate over 1,000 military installations on foreign soil, including 268 in Germany and 124 in Japan. In all, we have American military personnel deployed in 150 countries around the world.

The American right, when it is shying away from its small government utopianism, and simply making excuses for a failure of American investment in its own people will clamor, as it is doing now, about the national debt. In reality of course, despite the Republican crocodile tears about the size of America’s national debt, ours clocks in at 35th.  As for that conservative small government utopianism, again, despite the Republican hollering to the high heavens virtually around the clock about the ballooning size of government, government as a percentage of GDP has been the same for many decades now, and the size of the American government comparatively is 144th out of 160 nations. Some “big” government, that.

Conservatives like to say we no longer can invest in our people, because revenue collection is now verboten, taxes the economic entity that dare not speak its name, at least in Republican circles.  Not only do Americans enjoy some of the lowest comparative tax burdens in the whole world, by our own historical standards we are near the lowest we have ever been in overall taxes paid to government, around 9% in 2003, and only a hair greater than that now. Income taxes for the wealthy equal the lowest since the Gilded Age, and the estate tax, for most of the nation’s history a reliable and broadly venerated source of revenue has now been all but abolished.

Conservatives fetishize the private sector, asserting that it should, and can do everything the public sector does, and even better. If healthcare is any example, I don’t think so. In fact, government-run healthcare, Medicare and Medicaid have a third of the administrative overhead costs of private insurance, meaning it is significantly more efficient than the private sector, contrary to conservative mythology and intentional misinforming. Of course, theoretically all of our roads and highways could be private, pay-as-you-go enterprises and Americans could, on top of what they are paying the private oil companies for gasoline, and in taxpayer subsidies and incentives of course,  pay for road privileges on the order of what they currently are paying for private health insurance, private schools, cable service and oh say, the priviliege of using a credit card, though for the latter, you ain’t seen nothing yet if Republicans achieve their total deregulatory wet dream. Welcome to the conservative utopia.

All of this together reiterates the point that indeed America, indisputably is sliding behind, it is lagging, it is in significant respects deteriorating due to neglect. And there’s a clear and direct causality.  America can have rock- bottom taxes, especially for its wealthy and its corporations, some of the lowest rates in the world in fact, and it can retain a comparatively tiny public sector, with the minimal public investment, other than for defense, which has been the standard for the last thirty years or so of conservative dominance.  Or, it can have top notch infrastructure, healthcare, education and public services. But it can’t, and it won’t, have both.

If we choose, or if we allow it our politics can remain silly, fanciful, illusory, oblivious and fully detached both from concrete reality here and in the rest of the world, enabled by our comparatively silly and unserious and facile media, whatever the consequences, which already are real, and are guaranteed only to become more vivid and serious, unavoidable and inescapable. Or, we can shake ourselves and our polity out of this credulous indulgence of conservative radicalism and prodigious propaganda, out of this belated adolescent phase of Ayn Rand utopianism, radical nostalgia, economic and philosophic superstition and magic beans and rejoin reality, and proceed competently, with renewed allegiance to material fact and American progress.

But for the moment, from almost any perspective, America is a fraying and a raving basket case.