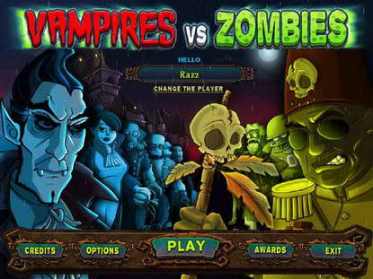 The important people populating Sunday television news shows are all aflutter about whom Romney will pick to be the running mate for his sacrificial lamb dream team. Frankly, these discussions have been so exhilarating and the drama surrounding the choice so intense I confess to sleeping poorly. However, to be serious for a moment, there is a real question of which of the two major categories of the undead would be most suitable for the Romney ticket: zombie or vampire.

The first question to answer of course is how best to balance the ticket, a perennial consideration for presidential nominees as old as punditry itself. So one must ask which offers preferable balance when a wind-up toy is at the top of the ticket: a biter and bloodsucker steeped in Republican economics or a super hungry, hyper angry culture screamer and all round bellicose, teeth-baring foreign policy snarler heavy on Republican id?

Of course in an ideal world one could solve the problem by tapping the one person combining the best of both post-mortem species, Richard Cheney. But alas, he is now less Braveheart  than Borrowedheart, his days as an official government torturer and fibber surely behind him. Yet his unique skill set of voting against Head Start and starting unfunded, nonsensical wars is going to be missed among the sans formaldehyde crowd of carcasses over on the right. A tragic loss when one considers that for a standard-bearer for a party whose ideas were thought to have been thoroughly embalmed nearly a century ago, and whose appeal is largely to the paler shade of Americans, no one can surpass the man who has always looked like death on a cracker.

But back to reality. Ted Nugent certainly has a career that walks the earth beyond the grave of his buried musical relevance, and I am willing to speculate that he reads more newspapers everyday than Sarah Palin. Here is a man with zombie gravitas. On the other hand Jan Brewer has that freshly dug up look you like in a nominee, and along with fellow zombie Joe, “You lie” Wilson has the manners of creatures living in abandoned buildings and dank basements. In Brewer’s favor, one senses she has recently eaten something alive:  rabbit, immigrant, stray cat.

Frankly…and in all fairness this may have to do with the faddish representations of them recently in popular entertainment, vampires seem a little twee to me. I’m not doubting their appetite to suck every last drop of economic lifeblood out of the middle class and working poor by perpetuating stagnant wages, diminished security, lessened mobility and growing inequality. But when the candidate at the top of the ticket looks like he came in a box, the bottom half of the ticket needs churlishness, and vampires are just too Vanity Fair.

I thought of separating out the zombies from the vampires among the highly mentioned: Rubio, Daniels, Portman, Ayotte etcetera; but all of them are so profoundly null, and coverage of this election already promising to be such a coma-inducing glaze of tedium that just the thought of it made me wish that I were dead. So in all candor, though the vampires can dress up like they’re civilized while reliably draining the sustenance out of the middle-class, I’m going to have to go with the zombies here. Who better to demonstrate visceral conservatism than somebody literally aching to actually eat your viscera?