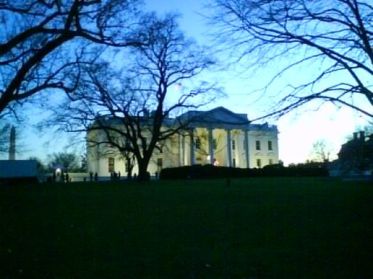 A body has been discovered on the floor of the Oval Office. The deceased has been positively identified, though was known to have used several different aliases among friends: progressivism, Democratic Priorities and liberalism. Homicide investigators now have concluded it was an inside job Republicans on their own never could have accomplished.

Whether the death was the result of an act of premeditation, self-defense or panic has yet to be fully determined. Evidence was found on the Presidential computer indicating that over several months the president has made the following google searches: independent voters, centrist, bipartisanship, triangulation. This has led prosecutors to believe murder in the first degree is the appropriate charge. Some evidence points to a president under attack by an armed assailant. Unfortunately rather than kill the actual assailant, an innocent party was killed instead. Self-defense clearly is inapplicable according to prosecutors. Presidential panic at the results from 2010 mid-term elections has been offered up by public defenders as a mitigating circumstance. Prosecutors have yet to render a decision there.

What is known is exactly how the murderer went about his business:

The President was guilty of publicly conceding the preposterous Republican assertion that debt and deficits were the nation’s most pressing priorities. Once he had made such an unnecessary concession, the victim’s life was placed in certain jeopardy.

The president repeated verbatim the canard that tax cuts contribute to job growth in a demand-starved American economy. He further accepted, and so stated publicly that tax increases, against all historical evidence, are economically damaging. This indisputably puts a weapon in the suspect’s hands at the time of the murder.

The president was guilty of depraved indifference toward reality when repeatedly embracing the illusion of compromise, bipartisanship and fruitful negotiations with those lacking the mental capacity to understand their actions.

The president repeated verbatim the Republican line of many years that Medicare must be whittled down in order to “save it,” though in fact reversing the rise in healthcare costs which are the principal cause of rising Medicare costs, eluded mention.

Witnesses placed the president at the scene of a vast failure to rhetorically defend Democratic traditions and successes, or to exhibit firmness and determination against Republicans’ assault on both the victim and recognizable reality.

The president put the defendant in mortal jeopardy by creating an impression that all Democratic presidents are hapless patsies.

Funeral services for the victim will be held at Bernie Sanders Mortuary. A viewing for the deceased will be open to the public beginning today, and continuing until a date to be determined later.