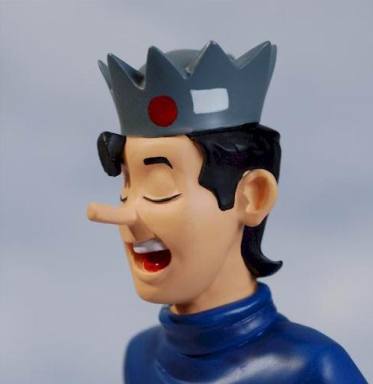 Rick Perry appears to be determined to live up to his Texas reputation as George Dubya sans the sophistication. Observing his campaign to date there is little question he and his consultants have made the decision to present a contrast between a pliable, over-thought Obama and Perry, a take-no-prisoners he-man with a message so simple you can write it on a fortune cookie. In a Republican primary at least, that’s the extent of reading a prospective voter is likely to do, too busy being angry as hell at everything that moves, other than ministers, corporations and creamy white town halls to search for facts in longer reading material

After being roundly ridiculed for all but putting on a clown suit and floppy shoes with a dumb comment implying a bunch of Texas rednecks might whup the ass of the Chairman of the Federal Reserve (now there’s a challenge for a mob of Texas he-men) he has used the occasion to demonstrate his gubernatorial shtick of never backing down and never taking it back. He said, “I’m just passionate about the issue, and we stand by what we said. Obama’s approach is to study these things. We know what the problem is. We’re being overtaxed, overregulated and over-litigated.”

I suppose he figured the Texas two-step of doubling down and lying worked well enough for Sarah Palin and Dick Cheney with Republicans’ know-nothing base of the forever-peeved, so it’s a strategy tan, rested and ready for this election season. The lying should go down smoothly enough with his target audience, the ultra-right base of the party, re-branded as “The Tea Party,” astutely naming itself after an ostensible anti-tax revolt precisely at the time taxes were being reduced for 95% of the American people and across the board are as low as they have been in American history. The irony that the original Tea Party pitted American merchants against the kind of big corporation Republicans love to support was one they would never get within a Longhorn state distance of.

Despite America having the lowest personal or corporate taxes in the first world, being so under-regulated our financial, banking and real-estate sectors brought the world’s economy to its very knees only moments ago, the debris from which we continue to attempt to dig our way out of with no help whatsoever from irresponsible Republicans, and that lawsuits roll off corporations’ backs like polluted water off a factory pipe, the simplistic mantra that we’re “overtaxed, overregulated and over-litigated,” will stir the accepting hearts of the base, or at least, those who are as yet unconverted by our Aimee Semple McPherson of Waterloo, Michele Bachmann.

This calculation that the American electorate as a whole however, the general election voters, are desperate for another chowder head as adamantly and proudly resistant to thinking as Archie Bunker is highly unlikely to be an accurate one. Still, Rick Perry would have you believe he’s a big, old no nonsense, toughened Texan.  Only, in reality, with Rhinestone Rick, about the only thing in this phony’s holster is a hair dryer.