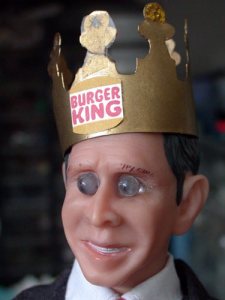 Lawrence O’Donnell has analogized the Republican controlled House to the House of Commons in Britain which is the solely functioning legislative body there. Of course Britain’s parliamentary system does afford a little power to the Prime Minister. The Republican majority in the House of Representatives, those immaculate scholars of constitutionalism not only do not seem to credit the positions of those other elected guys over in the Senate, they apparently figure their fancy neighbor with the limos living in the big, white house down the street who received 365 electoral votes and the votes of 70 million Americans doesn’t carry much juice either. After a careful re-reading of the Constitution these constitutional pips have discovered that contrary to the work of earlier scholars, indeed the executive branch and senior body of the legislature are constitutionally subjugated to the mighty House of Boehner. I crown them king!

Though I’m kidding, unfortunately House Republicans aren’t. They just passed a bill, clearly named in anticipation of turning it into a Vegas comedy bit, the Government Shutdown Prevention Act, which includes the language, “If the Senate fails to pass a measure before April 6, 2011 providing for the appropriations of the departments and agencies of the Government for the remainder of fiscal year 2011, H.R. 1 (as passed by the House on February 19, 2011) becomes law.” Now that folks, is comedy.

But this groundbreaking and visionary constitutional novelty aside, Republicans in the House seem to have concluded their power is such, even when it rests rather than in remarkable Constitutional interpretation but on the threat to hold their breath and turn blue, that their position in any debate or negotiation on matters before the nation shall be predominate over all others. Those other schleps taking up valuable space in the government must meet them half…make that nine-tenths of the way, because such is the nature of democracy in a Boehner House constitutional system.

Rather more eye-opening for those of us just learning about the Boehner system and not as far along in our education as we would wish to be, there appears to be a codicil or obscure amendment in the Constitution requiring that an extraordinary amount of discretion over matters of state rests in the hands of something called The Tea Party Movement, whose power in the House of Boehner is nearly absolute.

You may protest that you have heard the Tea party, perhaps ten percent of the population, is clearly the most wigged-out, wooly-headed, hole-in-the-headed, uncomprehending, clue-resistant, peckerwooded, hydrocephalic, fact- fearful, knowledge-allergic, flat delusional, bona fide hysterical, cave-dwelling, bigotry-soused, cranium-dented, ungodly wrong bunch of dimwits in all the land. All I can tell you is: the Constitution is the Constitution.

Don’t take my word for it.  Ask a true constitutional scholar: Michelle Bachman.