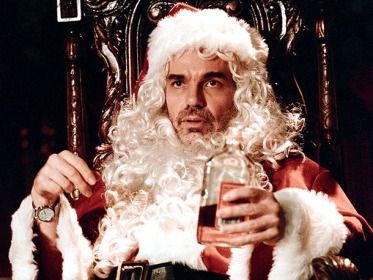 One expects a lot of hoary reruns of heart-tugging movies at Christmas, but this year’s inescapable smelly old chestnut is only a little over a year old, the one where Obama passes out gifts to Republicans like a Rastafarian dealing pot in the park, while Republicans sodomize the entire Cratchit family. Ho friggin’ Ho. Where’s Antonin Scalia when you really need a cop on the sodomy beat?

I drink a lot, but I’d swear I heard Obama say over and over again that those Bush tax cuts would be prevented from expiring only over his dead body. Sounding almost as adamant as thespian mannequin Charlton Heston declaiming “I’ll give you my gun when you pry it from my cold, dead hands,” (Chuck, now even deader than he was then, was buried in 2008 with his military assault rifle still in hand thanks to the promiscuous post Assault Weapons Ban era) Obama now looking remarkably lifelike already is pitching a deal to Republicans raising taxes only on incomes above 400 thousand a year. In fairness, maybe he realized Republicans would be too meshugana to take even the sweetest of sweetheart deals from Obama the Great Satan, though whatever the case, sensible people should begin to fidget.

Somewhat worse, Democrats have been making inappropriate noises about diddling with Social Security in a grand bargain, coughing up the concession in the face of non-existent mounting pressure, proposing a change in the way Social Security’s cost of living increase would be calculated (read about the chained CPI, if ye dare) which when all is said and done is a fairly sizable ding in the income of the typical senior. This action plan from Bizarro World, remarkably, unbelievably, fails to take into account that Social Security with its worker-funded trust financing benefits has no connection whatsoever to the rest of the budget, and consequently nothing to do with the budget hole. So, despite the fact that throwing Social Security into any discussion of budget deals is nuts, Democrats are voluntarily doing it anyhow, the only fathomable explanation being that it is some sort of symbolic genuflection to Republican blood lust designed to invigorate Republicans’ previously undetectable good faith. There’s been so much Republican run-off of insanity into the Washington water supply everybody is loopy now.

As for guns, I’m not sensing an especially rosy prognosis for reining them in, given that the new Republican mantra on guns is that the only thing endangering the safety of Americas now is far too few of them. Call me gloomy, but I’m not bullish on cooperation when Republicans are suggesting that packing the six year olds off to school with heat in their Icky Bugs lunch box is the key to ending school violence.

This gets us to what is the profound gastrointestinal challenge of not removing one’s gaze from the spectacle of that which passes these days for politics, policy making and governance. I say this with an offer of the heartiest seasonal good tidings to psychos and nitwits everywhere, but it may be time to accept the proposition that the nation is ungovernable not to mention doomed when one of the two major political parties is Section 8 and the other is a bunch of pussies. We have entered a reality that is practically fraught and philosophically ill-advised.

I think I’m going to be sick in my stocking.