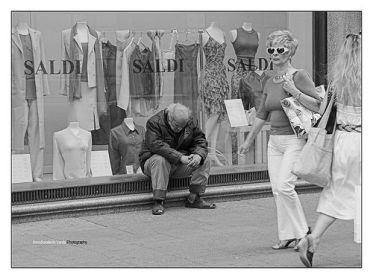 The enormous wealth America possesses and the reality that consumers in America are tapped out is less a paradox than an economic cover-up. Conservatives rail incessantly and boorishly about how America can’t afford, well, anything, other than trillions of dollars and counting in tax reduction for the one-percent and a regularly scheduled war. What they’re actually saying is that the government is starved of revenue because tax rates on the people with the real money are at historically pampering levels; while tax revenue collected from the corporate sector remains at equally generous historic lows, and Republicans are fine with, if not giddy about that. It’s high time for government haters, and the one-percent: Grover Norquist is regularly orgasmic.

For the rest, life is not so grand. Republicans exhale a huge cloud of smoke with the intent of obscuring a terribly inconvenient fact: While wheelbarrows of money are parked all around the country,  government lacks enough to pay for the programs and the investments the nation so desperately needs because Republicans seek to protect the rich,  successfully so. Likewise, CEO’s and management at the highest levels keep every dime of profit for themselves, and an ever more productive workforce garners less. Naturally the appropriate response from every red state whose government has turned obscenely red is to assault the labor unions doggedly working to put a little of this wealth in the pockets of the middle class.

Only yesterday Senate Democrats attempted to address this woeful state of affairs by introducing the Buffet Rule, a plan so tepid it would be practically soothing for the wealthy to swallow: a minimum thirty percent tax rate for incomes of a million or more. Of course Republicans had another of their poor, poor Marie Antoinette moments and filibustered. The goal of Republican economics, with its advancement of wealth disparity and diminished public investment would appear to be another era as dolorously underachieving and finally disastrous as Bush’s was, the conservative economics still pushed by the same crowd that ruled the roost and soiled the nest.

If one didn’t know anything about today’s Republicans one probably would be certain Republicans would understand, or care, that with an economy 70% of which is consumer-driven it would be mildly intelligent to fortify, or even to uplift broad consumer demand once in a blue moon. Nah. Republicans’ capacity for short-term cons that are self-defeating in the long run is seemingly boundless. When middle class wages and income rose, when labor unions thrived, when CEO salaries were comparatively tame and the wealth was spread during the Fifties, Sixties and much of the Seventies our economy was a juggernaut. Now?  A wheezing pulmonary case.

The nation that is home to Exxon, Apple, Google, Goldman Sachs and Boeing, whose major financial institutions have more capital stashed away than ever before, whose wealthy have so much lucre they can’t gamble it away on derivatives fast enough has a middle class and working class whose wages have been all but stagnant for several decades now; who can’t afford to see a doctor, who can’t produce enough consumer demand to push the economy out of a sluggish funk. Republican Mazola Oil to the contrary the country can afford a lot.

Another paradoxical gem is not only does spending more make the country wealthier it is indispensable to any broad prosperity.  Spending on education produces a greatly more capable workforce; spending on transportation and infrastructure makes it easier for workers to get to jobs and to access their places of employment, not to mention the boon of construction jobs. In other words empowered consumers buying houses, cars, electronics and every other consumer good makes the economy hum. The right’s inclination to perpetually stiff them is a question for the ages or the shrink perhaps.

Healthy unions, not under assault by one-percent- subservient governors would help. Increases in the minimum wage would help: Adjusted for inflation the minimum wage is where it was in 1968. Public spending, yes, government spending would help enormously. Hiring back teachers and municipal workers tossed out of work during recession cutbacks when Republican members of congress refused to cooperate in providing additional stimulus aid would be a fantastic jolt.

Of course the only answer Republicans have is another chair for Louis XVI.