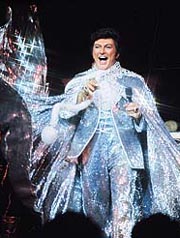 If you see a salesman’s polyester grin like the one that consumes the entire face of Rick Perry coming at you in a car lot, you know it’s time to turn and run as fast as your feet can possibly carry you. The best case scenario is that rather than trying to sell you something he’s just a game show host who has lost his way home from the studio and is looking to ask directions.

Perry’s opportunity to be a groundbreaking Texas political figure died the moment George Bush was elected governor, beating Perry to the honor of the first fence post to claim the governorship. George surely must have been highly inspirational to Rick when the latter began to consider a run for President of the United States…and why not? Floridians still retain the legal right to vote, and the Supreme Court is as nice as it ever was.

As much as the rhinestone governor is fraudulent when it comes to claims on matters of “substance”(more later) he’s quickly distinguishing himself as a preening jackass braying out pseudo-macho takeaway lines at every stop. Referring to Ben Bernanke, he yammered, “If this guy prints more money between now and the election, I don’t know what y’all would do to him in Iowa, but we would treat him pretty ugly down in Texas. Printing more money to play politics at this particular time in American history is almost treacherous, or treasonous in my opinion.” My own guess is that once you kicked dirt onto those fancy boots of his or got a little blood on the lapel of one of those expensive suits, Ricky would have his lawyer on the phone quicker than you could say “tinhorn”.

He may be under the misguided impression he is scaring the blue states with his faux badass talk, but let me inform him for his own good, there are plenty of neighborhoods here in Los Angeles where his rhetoric would get him treated pretty “ugly” himself. He may be surprised to learn how fed up many Americans are hearing it insinuated by fatuous Republican blowhards that their president and his political party aren’t American enough. They might let him know in a highly personal way what they think of this wink and grin form of disparagement coming from patriotic humbugs who in the words of Aaron Sorkin, “claim to love America, but clearly can’t stand Americans.”

As I noted in my earlier RICK PERRY IS ONE RHINESTONE COWBOY post, and as numerous commentators have been busily pointing out, Perry’s Texas Miracle spiel is as fraudulent as the rest of his J.R. Ewing shtick. When it comes to jobs, there is nothing remotely extraordinary about Texas: twenty-three states have unemployment figures as low or lower than Texas. Despite Perry’s claim of fiscal soundness, Texas has done everything but call David Copperfield for magic tricks to make a budget deficit of 27 billion dollars disappear.

Texas is 34th when it comes to annual median wage, and it has the highest percentage of minimum wage workers in the entire nation. Already a state with the paltriest of public services as the result of its pathologic aversion to collecting revenue, it has just finished gutting education for the first time since 1949, while closing nursing homes across the state. And while hypocritically huffing about the evils of stimulus, Perry was asking for and getting 6.4 billion dollars of the stuff to prop up the, “Texas Miracle”. The miracle is that anyone wants to live in such a low wage, low service, corporate-run state. Maybe it’s the cheap steaks.

Rhinestone Rick likes to brag about getting elected to governor several times, though for the record, he won most recently with 39% of the vote, though no doubt cows elected him through unanimous consent. Some have asked how Perry could win so many elections in Texas. In a word: money. Perry has been running a classic pay-to-play scam at Olympian levels.  An investigation by the Los Angeles Times has peeled back the onion on Perry’s “electability.” As it turns out, over his ten year period of electoral triumph, a loyal group of 150 donors has contributed 37 million dollars. As the Times reports, “half of those mega-donors received hefty business contracts, tax breaks or appointments”.

A billionaire named Harold Simmons who handed 1.2 million to Perry just happened to get a contract to build a radioactive waste disposal plant worth hundreds of millions. A car tycoon by the name of B.J. “Red” McCombs coughed up $400,000 to Perry and came away with 25 million in state subsidies to the Formula One racetrack he owns in Austin. Keep in mind that Perry has said that Medicaid, the healthcare program for children in poverty is too expensive, and that it needs to go. This is as vivid enough a portrait as one needs of what Perry and his Republican compatriots’ priorities and values are.

So yes, the “Texas Miracle” is the conservative paradise: a banana republic of high-living corporations, low wages and a crappy public sector for everybody else. Of course, living in Texas one enjoys the intangible privilege of bathing in the love of America Rick Perry permeates…except when he’s threatening to secede from the union of course.