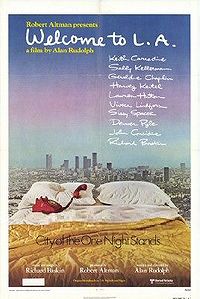 The words “real” and “Los Angeles” don’t ordinarily have a great deal to do with one another, and for good reason. Aside from its famous skin-deepness, the place is the definitive urban and suburban sprawl, with very little, if anything within that mass that is consistent from one end of the thing to the other. David Ansen, artistic director of the Los Angeles Film Festival currently underway remarked to a reporter for the LA Times that several of the Festival’s inclusions are worthy depictions of the titular city. This would be films that provide some accurate or vivid or expository or palpable rendering of the city and its essential nature, as opposed to films or television shows for which it is simply the most convenient backdrop.

There are past films, which for my tastes and experience are the most redolent of the “real” Los Angeles, depicting only fragments and segments of the city, which is how the city is experienced anyhow. They are also very good films.

Three of these were directed by the truly incomparable Robert Altman. My favorite perhaps is THE LONG GOODBYE, a post-modern genre satire of noir, based on the Raymond Chandler detective novel. Instead of cool, the Philip Marlowe here is a disheveled mumbler, whose idea of himself as cool is what is cool about the film.  It’s also very LA. It makes the mundane romantic and the romantic mundane. If your life in LA doesn’t flip unpredictably from one to the other, you’re probably not doing it right.

Altman’s THE PLAYER is ostensibly about the insider-ness of it all, it being the movie business. Altman incorporates the requisite schmoozing, weaseling, suck-uppery and narcissism, though the film really is the quintessential depiction of the delusional self-importance that infects people in the entertainment business like a peculiarly indigenous form of malaria. Likewise, it establishes what a pure crapshoot the movie business actually is. It is most incisive in showing how very tentative, exploitive, attenuated and distant the relationship between the movie business and creativity is, or between the Hollywood infrastructure and the creative minds it needs, and occasionally uses.

The third of the Altman films is SHORT CUTS, loosely based on the Raymond Carver story collection of the same name, and as the title would indicate, it is an episodic interweaving of stories and characters.  It may be the most panoramic view of the city committed to film, conveying the diversity of the people who live here and how they make a living. It is best at conveying the way different social and cultural strata mix it up across the city, and captures the balance of the glitzy and the prosaic familiar to Angelenos. CRASH attempted a less inspired, more sociological version of the same material, but with much less artistic success.

Two films were directed by Doug Liman, who later would direct the first Bourne film. One is SWINGERS, still the definitive Youth Come to Town to Make it in the Biz film. Besides having those whiffs of recognizable reality, the writing and the acting are a certifiable hoot. The other Liman film, GO, is darker, and deals with perhaps the less aspiring and wayward brothers and sisters of the SWINGERS gang, but has a similar recognizable reality. If you were to spend a lot of nights in the clubs and bars in the Cahuenga Corridor or Hollywood proper, and allowed the goings-on of the twentysomethings you’re drowning in to pass through your skin by some osmosis, you would sweat them out as this film. It has the lovable quirk of portraying how your exploration of the Los Angeles dark side can seem like a real lark, up to the point you’re dead, or scared shitless.

BREAD AND ROSES, by the geographically unlikely British director Ken Loach, is a perfect match for the director in subject matter. The story deals with a segment of LA a large swath of the city, and certainly its more affluent, chic-intoxicated or famously non-contemplative legions neither sees, thinks about or would consider worthy of time in front of the city’s glut of cameras.   It’s about the janitorial workers, mostly undocumented, who clean the city’s high-rise office buildings every night, the central plot revolving around their effort to unionize, but with sub-plots fanning out in a way that gives a real feel for the poignancy and texture of the characters’ daily lives. The telling is naturalistic and the acting unshowy and perfect. In a town that’s all about grand dreams, some of them as banal as they are tinselly, the dreams of these folks feel important and worth caring about. And in fact, the real-life counterparts of the characters here are more central and critical to the city culturally and economically than you might think, more so every day.

WELCOME TO LA made by Altman protégé Alan Rudolf is unapologetically Altmanesque, and like the master’s films it seeks the long view with another intermingling gallery of characters from a varietyof strata. It’s noteworthy for its saturated air of alternating cynicism and melancholia, romanticism and the romantically hollowed out. One would have to think Paul Thomas Anderson took a lot in style and structure from this film for his MAGNOLIA, though the latter is much more operatic than the earlier film. It’s an engagingly lyrical depiction of the inevitable sadness, loneliness, disappointment and isolation behind the glam and bravado, thicker than smog here.

CHINATOWN may be a period noir, but its screenplay is one of the several best screenplays of all time not written by Paddy Chayefsky. It was written by Robert Towne, who is in fact the next best thing to Paddy Chayefsky. He and Roman Polanski not only made one of the finest films of all time, but one of the best movies about the city of Los Angeles. That’s because its thematic core is the spiritual and thematic core of the city: power, money and exploitation.  Part history lesson, part Joan Didionesque anomie, part vintage noir, it is the miracle that can make the mix of incest, image, water rights and irrigation fascinating.

SHAMPOO, also written by Robert Towne while on a remarkable hot streak, is a personal favorite.  The story is loosely based on an actual hairdresser in Beverly Hills, acquainted with Robert Towne and Warren Beatty (playing the hairdresser), who pretended to be flamboyantly gay in order to sleep with the female clientele, often at their homes, and without raising the suspicions of the many husbands. Most of the “action” takes place around election night in 1968, the night Richard M. Nixon was first elected president. Observant, witty, hilarious, sweet and cynical, it is about a great deal more than its gauzy surface, somewhat in the same way that DOG DAY AFTERNOON, a classic story of New York is about much more than a bank robbery.

For my money, the story and film that still have the truest resonance of “real,” Hollywood-centric LA, is the Nathaniel West novel written in 1939, and filmed in 1975 by John Schlesinger, of MIDNIGHT COWBOY and SUNDAY BLOODY SUNDAY fame, DAY OF THE LOCUST. West was both a literary novelist and a Hollywood screenwriter and he nailed the place to the wall. What this place really oozes is star-blinded, illusion besotted, often pathetic and misdirected desperation, and Schlesinger captures it with bracing adroitness in this film. That mania, that inner incompleteness that seems to be the driving energy of so many who at some point came by plane, train, bus or Oldsmobile to find personal and geographic paradise, are discernible both underneath the surface and finally completely at the surface here. The dramatization of this condition only works because the seductiveness is very real, and almost everyone is to some degree susceptible. The film, like the novel has a surrealist edge and touch of grotesquery, and it’s not entirely pretty. But by god, it is LA.