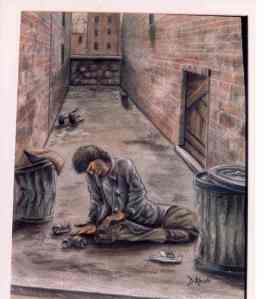 I loved CNN back in the day, when it managed to get reporters on the spot seemingly instantly for virtually every breaking story, and kept them there; had a cast of non-celebrity anchors who were fast on their feet and personably down-to-earth; and fearlessly reported from warzones and revolutions as if events beyond the border of the United States not only mattered but mattered a great deal.

CNN did politics then, too. The old Crossfire show, which had its ups and downs, at times had formidable and idiosyncratic presences like Michael Kinsley, or old school conservative mad dog Robert Novak going at it entertainingly. The panel on The Capital Gang gave opinions seasoned with the benefit of a lifetime of reporting from the political nooks and crannies, rather than serving simply as interchangeable opinion-bots.

Yesterday’s offering on CNN was a pretty representative sample of the lazy, incompetent doldrums into which the network has now sunk, not to mention the harmful banality it has embraced as its favored model. The focus of the day, meaning all afternoon and prime time, was “Weinergate,” a full blown attack of hyperventilation pertaining to the “Did he or did he not?” question of whether New York congressman Anthony Weiner sent a picture of, yes, a wiener, albeit still in its Fruit of the Looms, to a college girl via Twitter. CNN continuously looped the clip of reporters cornering the suspect as though he were the Elephant Man, and demanding answers. He never came right out and said he didn’t send it, so they persisted with a zeal and lack of deference one suspects they would not display were the subject of the grilling one of the congressional crackpots claiming default as a result of failure to raise the debt limit is no big deal at all.

But even worse than running this parody of an aggressive press in action virtually endlessly throughout the day, was their handing over of copious airtime to discredited media scammer and dirty trickster Andrew Breitbart, who specializes in media frame-ups through not so clever editing hackery, most notably of Shirley Sherrod, former employee of the Agriculture Department, and of ACORN, a group devoted to organizing and advocating for the inner city poor. There can be, and there is no justification for a news organization giving airtime to a multiply discredited dope, for any reason whatsoever, and certainly not because the smear artist’s website helped to widely disseminate the infamous crotch shot. How lacking in credibility, how ruined a reputation for accuracy, how manifestly indisputable a record of dumb publicity stunts and schoolboy media quackery is required before CNN will banish an individual from its precious air?

Breitbart, typically of course, took the opportunity to slander Weiner by referring to some second party hearsay insinuating Weiner is following a bunch of college chicks and possibly underage girls, all around the internets, implying offline relationships surely must be there as well. It’s just another day’s work for this half-witted Son of Donald Segretti (Nixon era nickel and dime political goon). But is CNN really so needy and so careless that it puts him on? Clearly, yes, on both counts.

This afternoon, naturally, Wolf Blitzer interviewing Weiner was the centerpiece of CNN’s day. CNN essentially got Weiner coming and going, yesterday building up the funky mess with the use of angry white boy Andrew Breitbart, and their laser-beam focus on “Weinergate,” so that today Weiner felt compelled to give them a “major” interview to dismiss the funky mess CNN and a brigade of right-wing spam-a-lots gave a head of steam just the day before. Seated facing one another, Wolf grilling Weiner crackled with a gravitas and tension that in Wolf ‘s mind no doubt was easily on a par with Frost-Nixon.

I have no idea if Anthony Weiner sent a girl a dirty photo. But I do know that Andrew Breitbart doesn’t know either, which didn’t stop him from pretending he did on television, nor did it stop oh so scrupulous in its own bizarre self-estimation, CNN, from affording him copious air time to slander Weiner.

CNN will recite ad nauseam what it interprets to be its objectivity, a rather warped version that regards all comments on its air, or pretty much anything floating around on a media signal to be worthy of notice, each bearing as much merit as any other and everything of equal weight: idiocy, slander and inaccuracy all merely in the eye of the beholder. It is CNN’s settling for, and allowing this sort of false equivalency, along with a failure to engage in actual objective journalism, which is fearlessly discovering the objective truth and fearlessly presenting it, that causes CNN and others to spend their days like the one yesterday disgorging such vapid and wretched spectacles as they did, and in fact for sticking us all apparently in a permanent era of swift boats and death panels.

The remainder of CNN’s time yesterday was devoted to Sarah Palin’s Bus to Nowhere, CNN literally following hers with its own bus. Such a weighty event was this, a full technical and reporting crew was loaded onto the company Greyhound in order to follow the Rolling Squalor Revue from town to town. Never mind that Palin’s operation will not divulge the itinerary of this meander to media outlets; that is has no ostensible, or at least stated purpose; that Sarah Palin has yet to become a presidential candidate and likely won’t; and that the woman has never said anything remotely interesting or intelligent about anything, and only rarely makes any sense at all. Yet, unfortunately, this is MUST-SEE television to the folks at CNN, the reality show on wheels what you get now from “the best political team in television.”

I’d offer up all these grievances to CNN’s “media critic” Howard Kurtz, except that he’s the worst practitioner of this “split the difference is objective journalism” trope in the CNN building. So, from the daring days of Christiane Amanpour, the bold reporting of Bernie Shaw, Peter Arnett and John Holliman to now, where Wolf Blitzer, so dull he makes paint drying seem exhibitionist, ladles out the Washington dinner circuit pablum, while relentlessly beating the horse of the daily narrative well past the point of mortality, making one think the network’s founding visionary perhaps rather than Ted Turner was instead, Cokie Roberts.