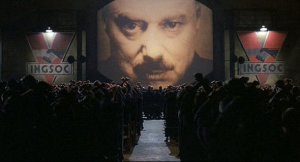 One of the most risibly stupid, scorn worthy and phony Big Lies conservatism gins up and spits out on a continuous basis is the one that claims that government is the greatest threat to Americans’ freedom, central to the overall “government is evil” meme.

The “threat to freedom” card is whipped out and played in reference to everything from health reform to Social Security to financial regulation:  in other words any action taken by the government on behalf of the many or in the public interest rather than targeted toward a selected vested interest is somehow a threat to freedom. Any safety net initiative, and certainly that rarest of actions these days, an expansion of the safety net or the addition of a safety net program…anything designed to render assistance to the unfortunate or temporarily in need, whether Medicaid or Head Start or senior services…somehow is a threat to your, yes, freedom. How? Beats the hell out of me; and it probably beats the hell out of the people who blab it. But as the saying goes, there’s a gullible Rush Limbaugh listener born every day.

Naturally, on the basis of simple common sense one can evaluate this claim and isolate its obvious banality, since the suggestion that the size of government or the power of government determines the menace of government doesn’t pass the Forrest Gump Test. What the government designs itself to do, what it actually does and how it is led determine whether it is a force for good or a force for ill.

Let’s be clear that when a conservative uses the word “freedom” it is always and only a reference to business practices and has no other application beyond it. As much as the right hee-haws about freedom, when it comes to personal freedom rather than businesses doing anything they damn well please, damn the consequences to the health or safety of the public or the consumer, conservatives are squarely against it in almost every case, consistently on the side of restriction, prohibition, interference, lesser rights and freedoms.

Whether the issue is abortion, euthanasia, the rights of criminal defendants, police powers, warrantless wiretapping, interpretations of the First Amendment or the extension of rights in general, including the nation’s major civil rights legislation, conservatives almost always have been on the side of less choice, less protection for the rights and freedoms of the individual, consistently advocating the limitation rather than the extension or expansion of rights.

The Bush administration’s warrantless wiretapping caper and its broader presumption of almost unlimited power in the executive branch surely had the most potential to jeopardize citizen rights since the draconian security measures during the Second World War. Not only did one not hear a peep of complaint out of most conservatives (in fairness, there were a few prominent conservatives, such as Bob Barr of Georgia who charged the administration with abuse for its warrantless wiretaps) one was likely to be called soft on terror or outright lacking in patriotism if one even brought the subject up, much less quibbled on the grounds of rights or liberties, therefore individual freedom..

Conservatives love their hierarchies, for instance corporations and the military, with their strict rules of order and vertical power. Freedom is not high on the agenda of either institution. And of course, conservatives, drawn to business and structure as they are, tend not to be in the cheering section for non-conformity or the unconventional, otherwise known as expressions of personal freedom, falling almost always on the side of conformity and convention. There are exceptions, but they are few. Social order, whether in the form of religious stricture or legal proscription or behavioral “norms” always have been an overwhelming and perennial conservative cause, not freedom.

Richard Nixon campaigning on the issue of “law and order” may have been convincing, if somewhat frightening, but Tea Party types espousing a deep concern for “freedom” have the credibility of a soft cheese.

When you tell me that regulation that curbs the ability of the local power plant to operate without regard to the health consequences for those in its proximity, literally a matter of life and death, is an affront to freedom, and out of the other side of your gob tell me tapping my phone without a judge’s approval not only is benign but salutary, you’ve surpassed hypocrisy and achieved something approximating the blasphemous.

When you tell me, nonsensically, that the expansion of or the guarantee of health care accessibility through government impinges on any Americans’ freedom, yet call for the elimination of Medicare, and the dumping of millions of elderly into the slavery of the private health insurance market  you’ve entered the realm of dangerous and foully immoral demagoguery. At the least there should be a national rolling of the eyes every time a conservative bandies the word freedom, if not an outright prohibition on them using, in other words, misusing the word.