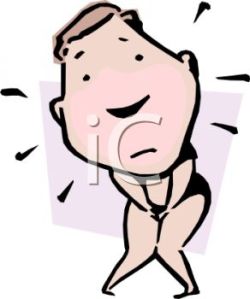 Though his motives were naked to most observers from the very beginning, Wisconsin governor Scott Walker had kept them on the hush-hush, or more accurately wrapped in a cocoon of subterfuge about the Wisconsin budget. But in a congressional hearing today, during a grilling by Congressman Denis Kucinich he squirmed until he could squirm no longer, and finally coughed up the inconvenient truth: yes, legislative gutting of unions was solely a partisan political maneuver having no effect whatsoever on the state’s budget.

Kucinich pulled up an analysis by the Wisconsin Legislative Fiscal Bureau, the state’s equivalent of the non-partisan Congressional Budget Office which concluded that Walker’s and Republicans’ anti-union legislation was “non-fiscal” rendering Walker effectively incapable of further dissimulation.  But the aesthetic qualities of his public busting were quite keen and quite pleasing:

KUCINICH: Let me ask you about some of the specific provisions in your proposals to strip collective bargaining rights. First, your proposal would require unions to hold annual votes to continue representing their own members. Can you please explain to me and members of this committee how much money this provision saves for your state budget?WALKER: That and a number of other provisions we put in because if you’re going to ask, if you’re going to put in place a change like that, we wanted to make sure we protected the workers of our state, so they got value out of that. […]

KUCINICH: Would you answer the question? How much money does it save, Governor?

KUCINICH: I want to ask about another one of your proposals. Under your plan you would prohibit paying union member dues from their paychecks. How much money would this provision save your state budget?

WALKER: It would save employees a thousand dollars a year they could use to pay for their pensions and health care contributions.

KUCINICH: Governor, it wouldn’t save anything.

Walker’s ideology was never in question, since voters understood, to the extent voters understand such things, that Walker was “a Tea party candidate,” the translation being: Far-out Ultra Right-Winger.  However, Wisconsin voters were not aware, since of course he didn’t tell them, that he intended once governor, with the help of Republican legislators to end the collective bargaining rights of the state’s teachers and government workers.

Whatever some Wisconsin voters may have understood about Walker’s ideology, one grounded in the belief, among others, that capital and those who use it possess social and economic value that dwarfs that of an ordinary worker, his budget proposals and proposed laws regarding collective bargaining reflected exactly that: tax benefits and incentives for high rollers at the expense of ordinary people who do the work, and their rights to unionize and bargain.

There’s no other name for Walker’s and Republicans’  union tomfoolery than political hackery, the equivalent of what his corporate benefactors seek to do, with the help of political marionettes like Walker, which is to get rid of the competition. So while Walker was lying to the face of his state’s citizens that his proposals, including the union-crushing parts were ALL about fiscal and budget matters, his only agenda was to knock some major financial pins out from under the Democratic Party, the competition. If there’s one thing Republicans live and breathe to do it’s to rig the game, and given their real agenda when and if exposed, it’s the only method through which they’re able to win. Neither pride nor shame enters the picture, so theirs is purely a primal impulse one supposes.

So one can hope Wisconsin voters hold him accountable both for his misrepresentation as well as for his hostility to hard working, modestly paid, middle-class teachers and state workers, even if his motives after election have been much too transparent.  On the other hand, if you’re a citizen of Wisconsin and you like your governor to be one part pocket change for high-handed high rollers and corporate values, and one part Great Deceiver, Scott Walker is your one and only.