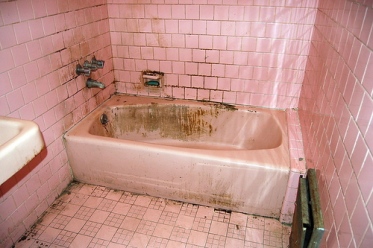 Richard Nixon, the patriarch of Republican sleaze didn’t really believe in anything other than himself and his putative brilliance as a global player. The latest Rick Santorum ad “Obamaville” featuring its subliminal flash of Barack Obama concurrent with the words, “Sworn American Enemy,” rather than remotely in the league of the Master’s best work is just another day at the Republican political office.

While all Republican things creepy and cruddy emanate from thine father Tricky Dicky, and putting aside that his administration was less a temporary government than a sophisticated organized crime affiliate with its all but institutional break-ins, bugging, payoffs, bribes, dirty tricks, spying, knee-capping and sandbagging flowing from the top down, Nixon’s real virtuosity was evident in the scheming, scamming, duplicity, sand bagging and sliminess done in full view, Nixon’s grin poorly concealing a boiling rage.

The Southern Strategy the Nixon gang conceived of and perfected in order to use subtle or not so subtle appeals to racial animosities and stereotypes (In fairness, Ronald Reagan probably did the groundbreaking work in the field in California) in order to capture and keep the white working class vote is considered respectable over on the right, and Republicans in their endearingly sociopathic way have never seemed at all embarrassed about it. No doubt, it appears early and often in Republican field manuals.

Ronald Reagan and his crew deeply misled the nation on several fronts, and their stigmatizing of the poor and demonization of government harmed the nation. Their prosecution of the war on government by viciously attacking the weakest and misrepresenting both the humanity and efficacy of government programs was deeply immoral, irresponsible and manifestly indecent. Yet in large part politically (Iran-Contra was secret and illegal, but wouldn’t be classified as a political operation) they did most of their dirty work in public, and mostly relied upon political relations brilliance, Michael Deaver probably the most gifted political and media advisor of the modern age. James Baker was about as good.

The ooze really started to bubble up with the presidential candidacy of preppie Vice –President George Herbert Walker Bush, whose call for “a kinder, gentler nation” was accompanied by a campaign that wallowed in filth and detritus. The old spirit was back, the late maestro of traditional racial politics and nasty tricks Lee Atwater engineering the latest designs in subliminal ads, fake photos, claims of photos non-existent and race-baiting Willie Horton spots, orchestrated lies about the opponent and his family, publicly disseminated ugly rumors…the Era of Personal Destruction was born. Though Atwater was gone from the campaign and even from the Earth by 1992, the Bush Machine managed to circulate the rumor William Jefferson Clinton somehow was a Soviet operative during his college years (and maybe STILL WAS) because of a student trip to the Soviet Union.

And then George W. Bush had Karl Rove, who all but bounced on Tricky Dicky’s knee back when he was a pup learning the dirty tricks biz with the best during the Golden Years, turning practicing political homophobia into a high art. And of course the Swift Boat tsunami of putrid against legitimate war hero and genuine patriot John Kerry was launched by an “outside” group, though one can know Karl Rove’s grimy, greasy fingerprints were all over the thing, one of the most vile and vicious deceptions in American political history. And no doubt Republicans are mightily proud. This is how they are now, those reptilian brains lighting up like the Ginza with every thought of a low blow. Their compartmentalizing of depravity as “just politics” is done with an ease of slack conscience and a capacity for moral self-deception that is highly evolved.

Rove’s and Cheney’s outing of Valerie Plame was worthy of the master’s dense and potent viciousness and violently unpatriotic subversion. When you think of yourself as an entomologist and place these bugs under the microscope it isn’t clear exactly what you’re seeing. The species is ferocious, that is clear.  Whether glassy-eyed conviction or cynicism motivates Republicans’ habitual trafficking in the political scum trade probably depends upon the individual Republican. In fairness to them all, it’s simply in their blood now, all but a determinative genetic trait, political biological warfare enabled by biology.

While Andrew Breitbart, Satan rest his soul, and his little buddy James O’Keefe soldiered on as independent practitioners of the Nixon’s Dark Arts, they come across more as petulant children play acting in a Grand Guignol of slimy immorality. In any case, Little Ricky Santorum and his creepy little “Obama is a scary, black, Islamic, other, Manchurian devil” ad is almost quaint. Which is fitting, since Santorum, not much more than an ambulatory sexual hang-up and a religious kook (not a deal breaker in the Republican Party by the way) isn’t going anywhere anyhow. Too many Republicans look at him and see a flaming humbug and a little punk for him to make the grade.

But “E” for effort, Rick, and onward and upward.