Born in France near the Swiss border, of mixed French and German-speaking Swiss parentage, raised in Normandy, and then Switzerland, living now in Paris and Geneva and Brussels, Ursula Meir is if nothing else truly international. But she is much more of course, a director of startlingly affecting and original films.

While her reputation internationally rests primarily upon her only two theatrically released non-documentary features, Sister and Home, these are two of the more unforgettable, artistically stirring films you are likely to have the pleasure of watching.

Beyond Hollywood, or beyond even the better, yet still too often disappointingly homogenous and creatively flaccid American indie world, is where the film enthusiast retains the best chance of discovering works that reflect a strong, individual artistic stamp, personal style in the service of movies with thoughtfulness and depth, as well as distinctive cinematic flair.

Indeed, Meir has created films that are wholly intriguing and genuinely involving, each in its own way contending both with the exigencies of the quotidian along with the great imponderables.

Her most recent film, 2012’s Sister, is unusual for both its central characters, a 12 year old boy and his older sister left to fend for themselves in the world, supported by the boy’s stealing, as well as its setting, the environs of a Swiss ski resort. Proximity is informative here, besides its centrality to the action, the boy living down the mountain in a shabbily mundane apartment building and working at the plush resort.

It’s extraordinary what Meir accomplishes with the visual alone, proximity coming into play again, Meir’s use of the panoramic, whether the scene is idyllic natural beauty or the most prosaic landscape, instinctive and natural, and subtly powerful. Naturalism and atmosphere cohabit here, and integrate with one another in an almost uncanny, bewitching way. Casual opulence, beauty, the hardscrabble and the mundane coexist with a seamlessness that perhaps can only be described as novelistic.

The story of the boy and his sister, their plight and their relationship and all the rest that transpires in this remote, removed place is by turns mesmerizing and elegiac, clever and emotionally resonant. Léa Seydoux as the sister, Louise, and Kacey Mottet Klein, as the boy, Simon, give convincing and powerful performances. 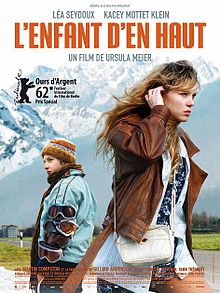 Meir’s earlier film, 2008’s Home, is wild and weird in the best possible way. It’s setting, like its successor’s, is remote and removed, though in a different way entirely. Starring magnifique French actress Isabelle Huppert, it is the story of a family not so much off the grid, as off the beaten path literally, having taken up residence next to an uncompleted French highway, with nothing for neighbors but miles of pasture and fields. The abandoned highway in front of the house serves as driveway, patio and playground according to need and inclination.

Though the family has lived in this arguably strangely paradisiacal retreat for ten years, highway workers begin showing up, much to family’s surprise, and it becomes apparent the highway is to be completed. If you thought the family was a little eccentric before, wait till you see what happens now.

Like many films from abroad, you can’t imagine any American production company ever making it, though if they did, it inevitably would be a story much too ripe for idiocy. In Meir’s hands, the existential drama that unfolds as the highway begins to fill with traffic is a smart, and wooly ride of the imagination.

Each family member’s knack for the ingenious and the innovative is elevated to another level, one might say, though what flourished uninhibited in freedom is now compressed, rendered harried and finally bedeviling, personal pathologies, relationships and neurosis boiling under pressure exerted from within and without in varying measure.

As with many a work of art, and certainly impressive ones, what you make of this one may also depend to some degree on what you’re bringing to it. But as you take your leave of Home there should be little doubt you have been amused and provoked.in the richest possible way. 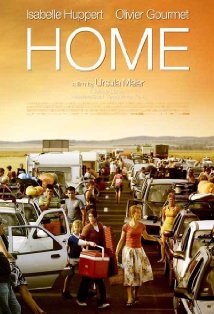