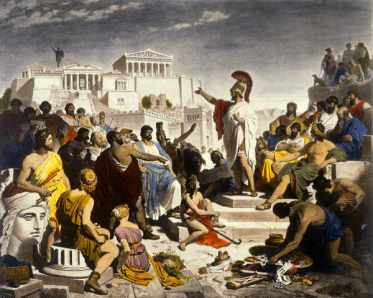 From the nation whose fervid, roaming minds produced the Ronco Five-Tray Electric Food Dehydrator and Duck Dynasty comes a version of governance appropriate for such a land of odd aspiration, monstrous ambition and unusually easily befuddled citizenry.

Two and a quarter centuries of “democracy” have rendered the present-day peculiarity of a nation whose tax and regulatory policies, and laws in general stamp the legal imprimatur on historically monumental economic disparity, business and corporate domination, and paltry actual functional democracy.

How this restoration of feudalism sustains itself is even odder and infinitely more hilarious. The wealthy and powerful retain the suzerainty of the feudal manor through an antiquated institution we call the United States Senate, whose equal representation of states regardless of population, and insulation from the ‘one man one vote’ principle is enshrined in the Constitution guarantees minority rule by lower populated and largely rural areas which of course remain perversely, if admittedly side-splittingly in thrall to the manor. Who’d a thunk it?

So, in effect, the nation’s economic feudalism is sustained by what can only be described as a vibrant Rube-ocracy. Along with the world’s first televised talking horse and the Barcalounger we now have invented the world’s very first Feudalist Rube-ocracy. How the Australians beat us to the discovery of wine-in-a-box warrants deep academic study by our brightest minds, though I’m aware they are interested solely in becoming “quants” at investment boutiques now.

One has to think the Athenians would find our “democratic” contraption amusingly droll, particularly considering the indisputable improvements we’ve managed to make to the original franchise through such innovations as abolishing slavery and enfranchising women with the right to vote, though not without all hell breaking loose first. Tellingly perhaps, the Rube-ocracy didn’t think much of those innovations either…no siree, and fought against them tooth and nail.

In judging, perhaps quite harshly, the limits of our achievements under the circumstances the Greeks should know that many a battle for civil rights and equality were indeed won, and that the battle for economic and political fairness abides. So we haven’t squandered our advancements over their, or our Founding Fathers’ flawed brands of democracy entirely.

Surely the Founders would get a belly laugh out of this current regime of American oddity shortly before surrendering fully to their despair. Madison was prone to thinking of the states as backwaters liable to behave in such worryingly loony fashion they could only get the entirety of the nation in trouble if left to their own devices. So perhaps he would find the Rube-ocracy to be as quaintly amusing as it is terribly disturbing, and utter a relieved, “Not my problem”.

Likewise the Founders explicitly deplored concentrated wealth and the power of such wealth and presumably would vomit into their three-cornered hats at the sight of our governmental bodies operated by remote control by wealthy and powerful interests, that is after explaining to them first of course what remote control is.

Were I more erudite I would certainly know what in the language of the Greeks is the word for fucked, though to my credit at least I do understand we are.