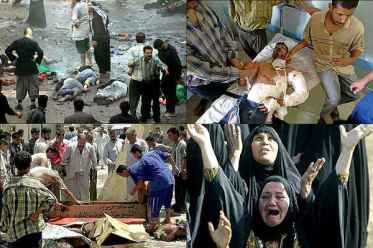 Like millions of Americans in the summer of 2002 when assorted flaks for the Bush administration began to howl and bark at Saddam Hussein in preparation for an eventual decision to invade Iraq, I wondered what dark orifice or remotest left field this was pulled from.

But the Bush administration had its reasons: making a post-9/11 display, and I emphasize the word display, of American willingness to deploy American military might if looked at sideways anywhere in the world; to pump up hapless Dubya Bush’s sagging poll numbers which were slumping back to their pre-9/11 pre-Afghanistan levels and to give a long-lasting steroidal boost to Republican foreign policy credentials; to retaliate for the foiled Iraq assassination plot launched against the daddy, George H. W. Bush; and with some mad, very, very badly thought out premise to enhance the security of Israel.

Of course if the actual reasons had been placed in front of the American people in order for them to render a judgment there would have been a massive collective rolling of eyes. So the administration lied. The administration deceived. The administration perpetrated fraud on its own citizens, the people’s representatives in congress and a timorous and groveling press. The Big Lie, the sis-boom-bah sales pitch was the putatively terrifying specter of the imminent threat to the United States posed by an extant Saddam Hussein said to be in possession, promised to be in possession of weapons of mass destruction.

How did they lie? As many ways as you can think of to lie on the day that is your personal best for effortless and proficient lying. On the public front incessant false claims, untrue assertions, baseless assessments and insupportable predictions by members of or representatives of or water-carriers for the administration did the bulk of the work.  Within government, redacted, selectively cited, omitted and manipulated intelligence along with all but treasonous bureaucratic sleight of hand did service advancing the deception.  The American intelligence community knew it wasn’t true, as did intelligence services around the world. Myriad foreign policy and defense professionals, weapons experts and specialists on Iraq and the Middle East as well as U.N. teams and inspectors knew it wasn’t true. But the truth was beside the point: the point was what could sell and what could potentially frighten.

By the single most obvious and important metric…whether there were weapons of mass destruction in Iraq, the Iraq invasion was an all but unprecedented moral, foreign policy and material failure by war advocates and the administration. There were no weapons nor was there a weapons program nor had there been for over a decade. For more than ten years Saddam Hussein had been in the lockbox after being monumentally ass-whipped in the Persian Gulf War, squadrons of U.N. and other inspectors way up in his business since, while the no-fly zone remained effectively in place over the Kurdish territory in Northern Iraq.

So there are 190,000 dead, millions displaced, untold human costs, not to mention a 2.2 trillion hole in the American budget thanks to this fiasco. American security, foreign policy and moral authority were squandered in the desert dust. Shiites favorable to Iran are predominant in Iraq now, a new Iranian ally where before there had been an enemy. The ethnic and sectarian civil war unleashed a decade ago in Iraq not only resulted in years of deadly ethnic cleansing but along with the Sunni insurgency continues to this very day.  The Associated Press reported this morning the killing of 59 in a bombing in Baghdad.

No one responsible for this magnificent moral depravity has been held accountable and it’s all but certain none will be…ever. Lo, once again, the mighty and powerful are immune from accountability for their iniquity.

(For those interested, I have provided links to evidentiary reporting, investigative journalism, studies and reports documenting the deception in this disgusting national disgrace.)

CIA reveals intelligence from source in Iraq government revealing no WMD program in Iraq, information rejected out of hand by Bush himself.

Administration’s insistence on an Iraq-Saddam connection, despite intelligence to the contrary, and the non-meeting between Iraq and MohamedAtta

Report on British documents Proving Bush Administration’s Irreversible Decision to Invade Iraq as of July 2002, and the Intent to Mold Intelligence to Support the Decision

Story of the Forged Documents Purporting to Demonstrate Iraq ‘s Attempt to Purchase Yellowcake Uranium from Niger, and the Administration’s and British Intelligence’s Use of Them as Basis of Claim for Iraq’s Nuclear Intentions

Story of Bush-Cheney Attempts to Intimidate, Smear UN Inspectors Prior to War, Though Inspection Team Later would be Proved Correct

Report Debunking Bush Administration Claim that Inspectors Were Not Allowed to Fully Search and Inspect Iraq Sites prior to War and Documenting Inspections by International Atomic Energy Administration, UNMOVIC and UN Iraq Inspectors

“Postwar findings support the April 2002 Defense Intelligence Agency (DIA) assessment that there was no credible reporting on al-Qa’ida training at Salman Pak [training facility in Iraq] or anywhere else in Iraq.”

“In my 27 January update to the Council, I said that it seemed from our experience that Iraq had decided in principle to provide cooperation on process, most importantly prompt access to all sites and assistance to UNMOVIC in the establishment of the necessary infrastructure. This impression remains, and we note that access to sites has so far been without problems, including those that had never been declared or inspected, as well as to Presidential sites and private residences.”

Report on Findings and Conclusions of Post-War Inspection and Search for WMDs by the Iraq Survey Group: “No WMD Stockpiles in Iraq”