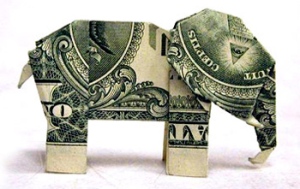 The Republican Party remains, blatantly, a wholly owned subsidiary of the international oil business, and coupled with its legislative efforts to protect financial institutions from regulation that would reign in the speculators in oil commodities trading, it has once again so conspicuously and unapologetically turned its back on American consumers that one has to ask, as I have asked a lot, why does anyone vote for these guys?

It’s understood that there is an ideological Republican base that will always support the party, as well as right leaning voters who almost always vote Republican and are immune to efforts to penetrate the thick ideological bubble in which so many conservatives now live. Other than these stalwarts one still wonders why some Americans continue to vote, repeatedly, in such diametric opposition to their own interests.

The president has asked congress, at a time when Republicans are howling into the night sky about debt and deficits to end the billions in subsidies and incentives that continue to go to one of the most profitable, if not the most profitable industry in the entire world.  At this time when “everyone must sacrifice,” you’d think companies that just reported historical profits (they seem to break these records now on such a regular basis that calling it “news” strains both the Webster’s and journalistic lexicon) would be consensus candidates for a more reasonable and realistic contribution. But when it comes to Republicans acknowledging reasonableness and realism here, surely you jest?

Not only are Republicans refusing to do that, they once again refuse in such a way as to insult the intelligence of anyone above the level of “enough to tie a shoe.” James Lankford, Republican from Oklahoma offered this rickety lie, “For more than two years, his administration (Obama’s) has knowingly increased energy prices by choking off new sources of traditional American energy and smothering our economy in new energy regulations.”

John Boehner, The Duke of Orange claimed, in keeping with the current Republican ideological fatwa on revenue as a means to pay for government, “Our goal is to expand the supply of American energy to lower gas prices and create jobs. Raising taxes would have the opposite effect.”

These aren’t just stupid lies, as one has come to expect from such people, they’re transparent, conspicuous, hitting you over the head with a mallet lies. Damn near anybody able to read a newspaper knows what a profit is. If it’s possible for a voter to read a headline announcing record profits, only someone with excessively low regard for a voter’s intelligence will turn around and tell the voter that the company with that enormous profit is too tight on funds to explore for oil. Or possibly Republicans’ record of propagandizing so well for so long informs them that they are reading voter intelligence about right.

Not only is the size of oil company profits available to voters, so is the recent news that oil companies, far from being in need of increasing supplies, as Boehner dimly claimed are not even refining the oil they currently have. The latest data show them utilizing only 81% of refining capacity.

The truth of course is that oil companies keep prices high by keeping supply low, with no real incentive to refine more oil unless their sales volume drops desperately low. So our Republican friends, all but giving the finger to the American consumer oppose regulations to reign in commodities trading that produces an artificially high cost for gasoline, and also support the tax giveaways to highly profitable oil companies who through reduced refining capacity again benefit from artificially high prices at a dear cost to American consumers.

The icing on those lies is the Republican claim that what America needs is more domestic drilling. If you can find a Republican who has honestly told the voters that all domestically produced oil goes into the global oil supply and the global oil market, these being internationally operating oil companies, you’ll be having a rare experience.

Rolling up to a gas pump here in Los Angeles, it’s almost a requirement now to be accompanied by a mental health professional because you’re going to leave the place traumatized. Next time you’re driving away from a gas pump dazed and confused by what has just hit you, think about your Republican friends defending and supporting the petroleum companies and the speculators. Honestly, if you fall for these Republican scams, you deserve to pay through the nose or worse.