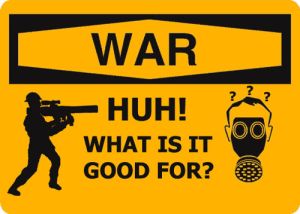 All right, I admit I am not endorsing war, generally speaking. But as a long-time, card-carrying member of the left-wing sector of the reality-based community I would ask for patience with President Obama’s considered, minimalist initiative to support the popular uprising in authoritarian Libya. It embraces two missions the left traditionally has endorsed and vigorously advocated: humanitarianism and the liberation of peoples.

The arguments for or against such an initiative would have been weighed much, much differently perhaps, had we not just witnessed and were we not continuing to witness the unfolding of powerful popular revolts against entrenched power in a part of the world long subjugated, as well as impoverished by authoritarian strongmen, monarchies and theocrats. The current uprisings are entirely organic and internal (as opposed to no small number of Western intelligence agency induced coups and destabilizations in myriad places over the decades).

Historically, America has seldom missed an opportunity to get itself on the wrong side. In this case, as with the Balkan conflicts of the 1990’s there is an opportunity to prevent a potential slaughter, and to provide a literal fighting chance to a population repressed for forty years.

This effort should not bear any burden of association with harebrained, nonsensical, cravenly motivated blunders like Iraq, though any thinking person naturally would feel a twinge of squeamishness about American military intervention in the wake of that supercalifragilistic cluster fuck.

No doubt there is a legitimate case to be made that an additional military commitment is problematical while America retains the remnants of its presence in Iraq, and an ongoing military involvement in Afghanistan, a well meaning and to some extent necessary involvement, if baffling when it comes to the goals and implementation of the policy there.

But the mission as Obama has outlined it and as it is being carried out at the moment is limited, genuinely multilateral, with as little risk and human and monetary cost as at all possible. In other words, for a relatively small investment it is possible to contribute both materially in one specific place, and psychologically and inspirationally across the Middle-East to a genuine regional transformation, and one indisputably for the better.

Like most, I admit to having no idea of the true nature of the rebel forces fighting in Libya, or if there are unifying characteristics good or bad, or even any consistent point of view among them. A great deal of news reporting describes those fighting as teachers, pharmacists, retail workers, managers, doctors…ordinary citizens in other words, risking it all, as it were, to depose a suffocating and brutal regime.

Likewise, I can’t predict with any degree of knowledge or confidence that tribalism or sectarianism will not fill the vacuum that ensues in the wake of Gaddafi’s removal. But I find it impossible to believe anything could be worse than the state of affairs under the rule of cold-blooded cuckoo clock Moammar Gaddafi.

And at the very least, Gaddafi has grotesquely and egregiously violated all the Geneva conventions pertaining to fashion sense.